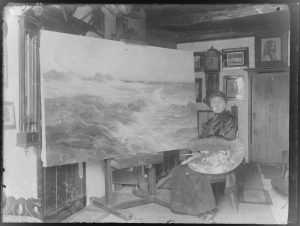 A glimpse into the artist’s studio

‘Finding Trewyn Studio was a sort of magic’, wrote the Wakefield-born Barbara Hepworth of her Cornwall studio. ‘Here was a studio, a yard and garden where I could work in open air and space’. Hepworth’s studio is now open to the public as the Barbara Hepworth Museum and Sculpture Garden, offering – like Dorich House – a special insight into the life and practice of a prolific woman sculptor. Both studio museums have recently joined the Artist’s Studio Museum Network. This is a European-wide project initiated by Watts Gallery – Artists’ Village, aiming to raise the profile of these special spaces, and encourage research into the history both of the studio and of the studio museum.

Studio museums are often haphazard survivals. They may have been preserved immediately after the artist’s death – if the artist died famous – or their establishment as museums may have been a labour of love managed by the artist’s descendants. Sometimes, like the Dürer House, Nuremberg, such houses may have been converted to different uses, before re-opening to the public many decades – even centuries – later. However, for every studio that has been preserved, there are many that have not.

Though many of the studio museums that do survive inevitably reflect the canonical focus on male artists, a significant minority of the studio museums featured in the Network are devoted to women. These include Dora Gordine, represented by Dorich House, and Hepworth, by the St Ives Museum, but also figures such as the marine artist Betzy Akersloot-Berg. In 1896, Akersloot-Berg bought ‘Tromp’s Huys’ a sixteenth-century naval home in Vlieland, The Netherlands, and she continued to live and work here with her husband, Gooswinus Gerardus Akersloot, until her death’ though taking frequent summers off to travel around Europe. Other museums, such as Charleston, East Sussex, and the Münter House, Murnau, testify to strong male-female professional and personal relationships: respectively, Vanessa Bell and Duncan Grant and Gabrielle Münter and Wassily Kandinsky. After Kandinsky fled Germany, his former partner (and fellow artist) Gabrielle Münter kept his work safe from the Nazis in the basement of the Münter House, along with major paintings by other members of the Blue Rider group. At her death, she left them all to the nearby Lenbachhaus (itself a former studio museum), thereby establishing a world-class collection of early twentieth-century art.

Often, too, wives of more famous men have had their own significant input into the site that survives, something that is increasingly reflected in these museums’ interpretation. The Millesgården, Sweden, was home both to the celebrated Swedish sculptor Carl Milles, and to his wife, the painter Olga Milles. The site that survives today was very much a collaborative project, with spaces added to reflect the couple’s changing creative needs. The same is true of Anchers Hus, Skagen, where Anna Ancher (née Brøndum) had grown up. Here, she and her husband Michael Ancher established themselves at the centre of a plein air artists’ colony, the so-called ‘Skagen Painters’. Meanwhile, at Watts Gallery ‘Artists’ Village, visitors can see not only the Gallery’ built under the eye of George Frederic Watts’ wife Mary, but also the Watts Chapel, which Mary Watts designed and presided as part of a long-cherished community education project. Often fortuitous survivals, artistâ€™s studio museums offer a rich alternative vision of the art historical canon. By inviting visitors into homes and private spaces, they provide exclusive access to a wide variety of different stories – often unexpected or untold, but always exciting.