Display over the fireplace in the Dorich House living room, c.1980s. © Historic England 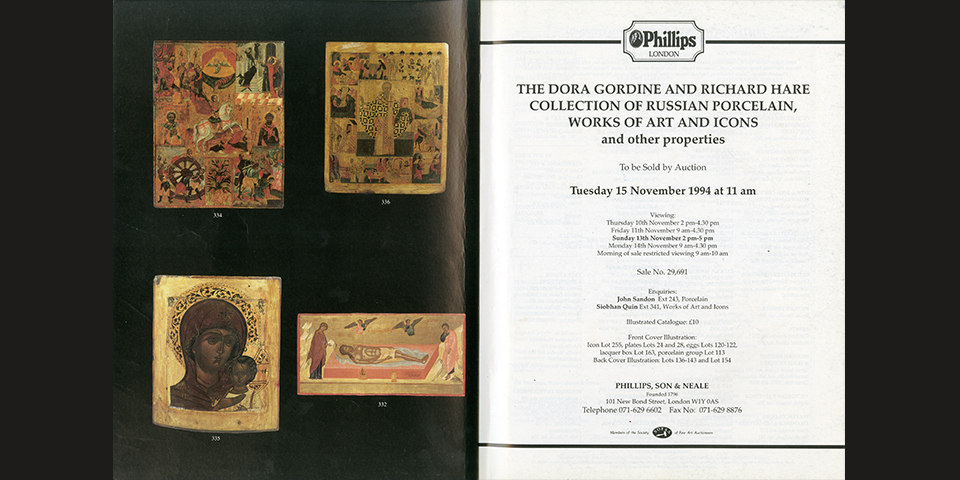 The auction catalogue for one of the main sales of Dora Gordine and Richard Hare’s Russian art collection, Phillips Auctioneers, London, 15 November 1994 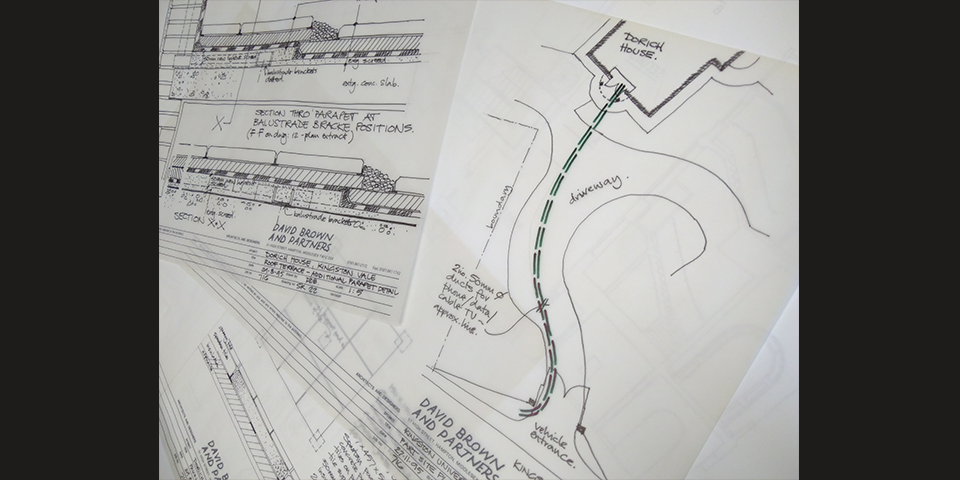 Plans for the renovation of Dorich House by David Brown and Partners, 1995

Over the course of 2019 to 2021, volunteers at Dorich House Museum have been exploring the little-known history of Dorich House in the 1980s and 1990s, focusing on its transition from Dora Gordine’s home into a museum following her death in 1991. This project has been made possible by a grant from the National Lottery Heritage Fund.

During this pivotal period in its history, Dorich House was acknowledged for its architectural significance through Grade II listing and was burgled, squatted, and used as film set before being acquired and renovated by Kingston University. To defray the costs of renovation, much of Gordine and her husband Richard Hare’s collection of Russian art was sold in a series of auctions.

‘The Squatter Years: Recovering Dorich House Museum’s Recent Past’ draws out three key aspects of this recent history, exploring these through articles, recordings, and images:

When Gordine died at the age of 96 on 29 December 1991, Dorich House was filled with her sculpture, paintings and drawings. It also contained an extensive collection of objects, mainly of Russian origin, that she and her late husband The Hon. Richard Hare had collected during their marriage, to which she added after his death in 1966. A burglary in 1988 led to significant losses to the collection and in the mid-1990s much of what remained was sold at a series of auctions. As a consequence, the vast extent of this collection has not been researched or made public until now.

In this online publication, volunteers take one or more of these ‘lost objects’ as a starting point for wider explorations. Having undertaken extensive research on the 54 auctions that took place over 1994–97, Alison McGregor focuses on the ‘star buys’ at the two main sales of Russian art and silver that took place in November 1994. Carley Bucknell tells the story of the 1988 burglary at Dorich House, attempting to trace some of the stolen objects. Beginning with some innocuous decorative wall brackets sold at auction, Nadia Stern explores Gordine and Hare’s collecting and their dream of establishing Dorich House as a museum of Russian art. Stella Beaumont finds in a copy of Arthur Symons’s poetry book London Nights dedicated to Gordine, an opportunity to rethink the sculptor and her social context. Nadia Stern positions Gordine’s sculpture in a wider context through a focus on a Ming dynasty iron head of Guanyin sold at auction that Gordine had cited as an influence in her lectures on Oriental Art. Louise Dear explores the history of an exquisite Fabergé tea set, while Stella Beaumont tells the history of Russian Easter eggs through those made in wood, papier-mâché and porcelain that were sold at auction. Rebecca Rushton finds in a beautiful enamel cigarette case an opportunity to delve into her own family history, while Louise Dear takes a look at Gordine’s personal style and how it changed over the years through a focus on a Chinese gold necklace and Vacheron Constantin wristwatch sold at auction. Finally, Carley Bucknell looks again at the 1988 burglary and explores the history of a Russian porcelain figurine that was recovered from the theft and is now in the Dorich House collection.

Louise Dear, A Closer Look at the Carl Fabergé Teaset

The Renovation of Dorich House

When Dorich House was acquired by Kingston University in the mid-1990s, it required substantial renovation, which was entrusted to the architectural practice David Brown and Partners. The practice has donated its architectural plans and records from the renovation to the Dorich House Museum archive and, with training by our project archivist, Nancy Lyons, our volunteers have photographed and catalogued many of the architectural plans. Through oral-history interviews, volunteers have also recorded the memories of those involved in the renovation and the changes and interventions made to the house and garden since it was built in the 1930s.

These interviews have revealed some of the challenges faced, the research undertaken, and the subsequent interventions made to meticulously restore the building, retaining the spirit of Gordine’s original design while making the interiors and grounds fit for their new purpose. Photographer Ellie Laycock’s ‘Dorich House Then and Now’ shows how the building has changed over time and the following essays chart the building’s journey, with reflections on the original design, its distressed state, and the work to transform the house and garden to what we enjoy today.

Then and Now | A Short Film by Ellie Laycock

The Wrecked House | Dorich House in the Early 1990s

The Architects and the Project Brief

The occupation of Dorich House by different people after Gordine’s death in December 1991 has long been the subject of myth and rumour. Newspaper reports and a few photographs in the museum archive reveal that the house was squatted, but what was the squat like? There were rumours of parties and raves at the house, but who came and what were they like? Dorich House was also used by the BBC as a set for the Nicolas Roeg film Two Deaths (1995), but what do we know about the use of the house as its location?

Through a series of texts, recordings and multimedia pieces, this online publication navigates the period from 1992 to 1994, trying to piece together the fragments from this hidden history. Conducting oral-history interviews with people who visited the squat and went to raves, and with university staff members and an old friend of Gordine, Mengfei Liu and Rebecca Rushton each tell parts of the story of the house through clips from these interviews. One of Mengfei’s interview subjects, Amy Schofield, also tells her story first-hand about her memories of an unforgettable night at a rave in Dorich House. A Gordine plaster, which was taken as a ‘memory of a beautiful thing’ by one of the people who visited the squat, is rediscovered and explored by Rebecca Rushton and Helena Bonett. James D. Moore, Eleanor Carter-Esdale and Lily Flood explore the history of squatting and raves in the 1990s and today and the hypnotic experience the ravers might have had seeing Gordine’s sculpture while under the influence. Looking at the history of the little-known Nicolas Roeg film Two Deaths, Peter Kirkpatrick locates critics’ reviews from the time that discuss its location. Finally, a series of photographs taken just after the filming had ended, including remnants of the squat, by former university staff member Isobel Porter also feature and capture the house prior to renovation.

Squatting and Raves at Dorich House

Dorich House: A Moment in Time

A huge thank you to the National Lottery Heritage Fund and to National Lottery players without whose support this project could not have taken place. Especial thanks to all the volunteers who took part, whether conducting object research and writing essays, recording and transcribing oral-history interviews, scanning, photographing and cataloguing archive items, to name just some of the wide range of activities. Thanks also to all those who have advised on the project, including Brenda Martin and Dr Louise Hardiman, and to all those who contributed to the wealth of oral-history interviews. Thank you to our colleagues Judi Farren Bradley (MSc Historic Building Conservation), Helen Wickstead (MA Museum and Gallery Studies) and Stephanie Dieckvoss (MA Art Market and Appraisal) for their enthusiasm and the excellent contributions of their students, and to Catriona Bowie and her students at our partner Grey Court School.

If you’ve got a story to tell about Dorich House in the 1990s, we would love to hear from you. Please get in touch via email on dorichhousemuseum@kingston.ac.uk