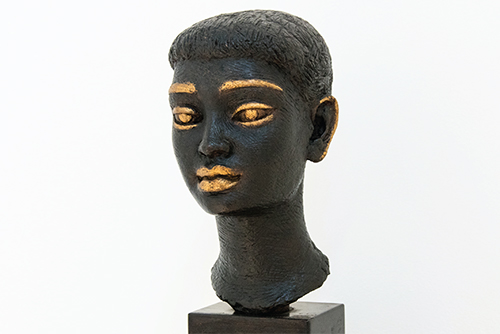 Now in its tenth year, the Holt Festival in Norfolk will again play host this July to a rich and diverse programme of arts events and performance from the fields of theatre, music, comedy, literature, politics and fine art. A particularly exciting feature of this year’s fine arts strand is the Festival Loan exhibition Head to Head featuring the work of Dora Gordine, Jacob Epstein, and other contemporary artists of the inter-war period, whose work was influenced by the ‘exotic’.

Head to Head effectively reconsiders an exhibition, originally staged by the Ben Uri Gallery in 2006, that explored the relationship between the art of Dora Gordine and Jacob Epstein and the influence of African, Asian and Oriental art on their work. Anthony Caro introduced the 2006 exhibition by describing Epstein and Gordine as artists with ‘a vision of the promised land’ who ‘cracked the mould’ and Head to Head allows us to consider at close range the significant contribution both made to the advancement of British sculpture in the first half of the 20th century. Exposure to and appreciation of ‘Primitive’ art had famously revolutionised the work of Modigliani, Brancussi and Picasso in the early 1900s, and Epstein, who lived in their Parisian milieu between 1909-12, was to apply an equally radical approach to his modelling and carving on his return to England. Whilst Gordine has been generally considered the more serene and less provocative artist, she too derived early success from depictions of generic racial ’types’ in works such as Mongolian Head (1928) and Malay Head (1931)

Dorich House Museum is delighted to loan works for the exhibition, which takes place in Holt at St Andrew’s Church Meeting Room.  Entry is free of charge and the exhibition is open from Saturday, 21 July to Sunday 29 July, 11.00 am to 5.00 pm daily, extending to 7.30 pm on Monday and Wednesday. On Friday 27 July Head to Head’s curator, James Glennie, will give a free talk about the exhibition at 11.00 am.