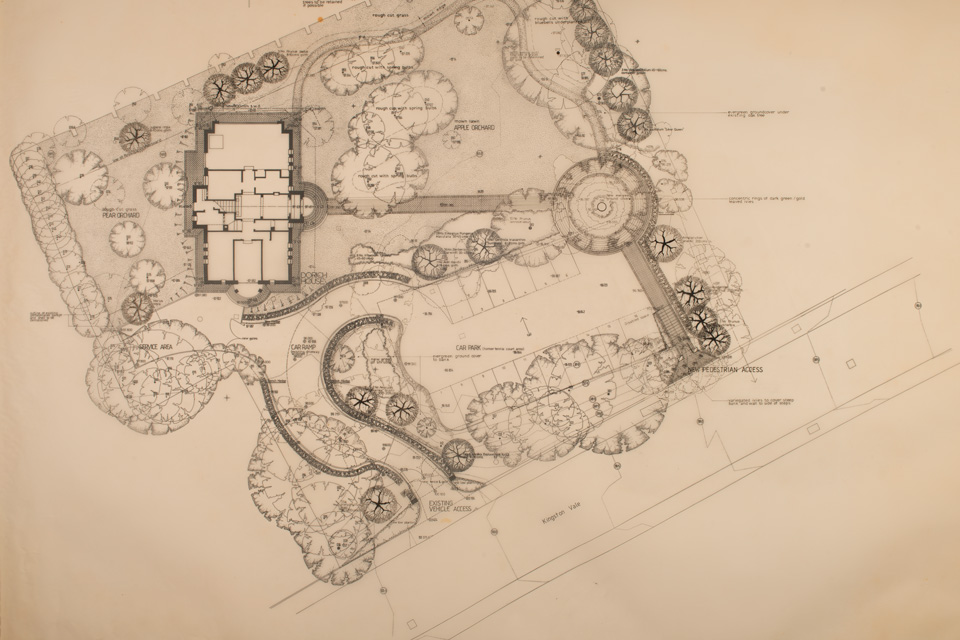 Each year, Dorich House Museum participates in Heritage Open Days, England’s largest festival of history and culture, bringing together over 2,000 organisations, 5,500 free events and 46,000 volunteers. Every year in September, places across the country throw open their doors to celebrate their heritage, community and history. As Dorich House Museum is unable to open to the public for this year’s festival, our Curator Fiona Fisher has shared some insights about the garden and grounds at Dorich House Museum, some of which has been uncovered as part of our current National Lottery Heritage Fund project, The Squatter Years: Recovering Dorich House Museum’s Recent Past.

Dorich House was built on a plot of around two thirds of an acre in a quiet and semi-rural location that was formerly part of the Kingston Hill Place estate. The land was parcelled up for sale in the late 1920s and the size of the plot is unchanged from September 1935 when Richard Hare acquired it.  The nearest houses at that time, Robinwood Cottage to the west and Back Edge (now Hollywood) to the east, had sizeable gardens and were some distance away. Richmond Park’s wall formed the northern boundary of the plot with Kingston Vale to the south.

Other than building a driveway with a turning space and a tennis court to the south-eastern corner of the plot, Gordine and Hare appear to have done little in the way of landscaping. The only other notable feature of early photographs of the garden is a long crazy-paved path, backed by a deep bed for planting, that followed the line of the Freebord, a strip of Crown-owned land that allowed access to the Richmond Park wall for repairs.

The perimeter of the garden was planted with trees and there were two small orchards, one to the east and one to the west of the house. The garden was both a space of leisure and a support to Gordine’s creative life as a place in which to spend time getting to know her models before embarking on a new work. Gordine used it to sew and make clothes and for exercise. In one interview of the mid-1970s, when Gordine was around 80 years old, she claimed to use it for her ballet dancing.  Growing and sharing food was another important part of everyday life at Dorich House. Garden produce was used for cooking and Gordine picked nettles and dandelions and concocted ‘unusual’ herbal remedies as a restorative for her guests.

The roof terrace provided another private space in which to entertain, sunbathe, and enjoy the tranquil surroundings and views of nature.  Gordine and Hare slept out under the loggia on warm summer nights and one teenage visitor, who kept the maid company when Gordine and Hare were away not long after Dorich House was completed, remembers sleeping out, seeing owls perched on the railings and hearing ‘the deer making their strange noises in the park.’

Watch Hilary Lloyd’s film, which features footage of parrots in the Dorich House garden. Created over the summer of 2016, Lloyd worked with non-professional actors in the House and grounds to make a new film that was based loosely around a casual script devised by the artist.

Earlier this year, we worked with our partner venue Stanley Picker Gallery to send weekly, themed newsletters highlighting previous projects, collection items and activity suggestions to keep our subscribers inspired and creative at home. The themes included ‘Outside-In’, inviting readers to explore the great outdoors from inside their homes and ‘Communities’, showcasing a series of postgraduate student projects built in the garden at Dorich House. Click the posts below to read more.